The advertisement has been certified by the Guinness Book of World Records as the largest ‘banner’ in the world. Ad-Air estimates that some 15 million people will see the advertisement every year. While Ad-Air does not disclose the price of its individual mega-advertisements, Ad-Air has stated that its prices range from R525,000 to just over R1 million per month. Ad-Air has also acknowledged that it has rights to 30 airports globally. Expect to see similar giant ads at both Los Angeles International Airport and Chicago O’Hare next year. 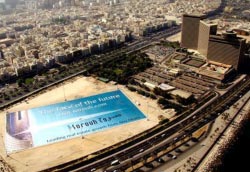 Sorough Real Estate plans to fill the advertising space with a million pictures of faces from people around the world. For every picture uploaded Sorough will donate one U.S. dollar to the United Arab Emirates’ Red Crescent organization, the Middle Eastern equivalent to The Red Cross.