The global large format printer market decreased slightly in the third quarter of 2019 with shipments down by about 0.5% compared to the previous quarter, according to the International Data Corporation’s (IDC) Worldwide Quarterly Large Format Printer Tracker. HP continues to dominate the wide format market, while Epson is "a leader in the low-end of the aqueous inkjet market, in the dye-sublimation segment, and increasingly in the eco-solvent market."

"While the large format printer market has been soft, there were some surprising areas of growth when we get into the breakdown by technology and region," said Tim Greene, research director of IDC’s Hardcopy Solutions group. "New products and aggressive marketing have driven growth in some technology segments, while application expansion continued to drive investments in UV and textile/soft signage printers."

Shipments in North America increased more than 4% compared to the second quarter, driven largely by the U.S., which grew 9% quarter over quarter in 3Q19.

Japan and Central & Eastern Europe (CEE) both saw strong growth in the third quarter. The CEE growth largely offset declining shipments in Western Europe while growth in Japan made up for softer than expected shipments in the rest of the Asia/Pacific region.

The IDC said there was no movement among the top three large format printer manufacturers in terms of shipment market share with HP, Canon, and Epson all maintaining their positions on a worldwide basis.

“Canon had 19.4% of the total large format market when its imagePROGRAF, the Oce line of technical printers, and Canon's Arizona and Colorado are combined.

“Epson is the number three large format printer manufacturer worldwide with over 17% of total shipments.”

But Epson is a leader in the low-end of the aqueous inkjet market, in the dye-sublimation segment, and increasingly in the eco-solvent market, the report found. “In the third quarter, Epson introduced its first 'eco-tank' large format printers, which the company says will reduce ink cost by 20%. This will be an important area to watch in 2020 and beyond.” 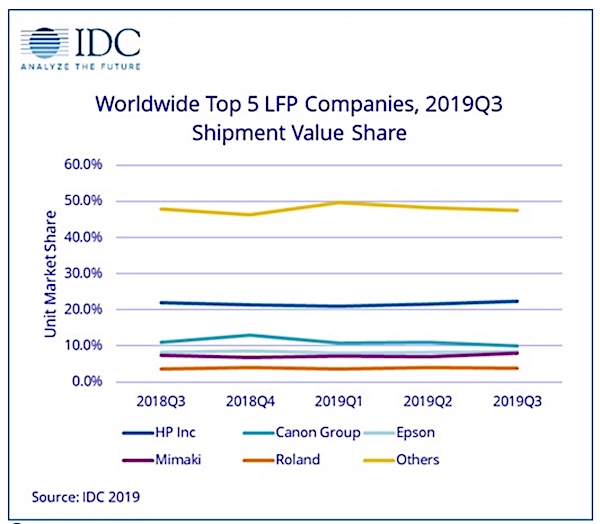 The report contains Shipment Value Share data of the 'Top 5' wide format technology manufacturers - HP, Canon, Epson, Mimaki and Roland – with other manufacturers such as Mutoh and Fujifilm gathered under the category “Others.”

The IDC is a global provider of market intelligence, advisory services, and events for the information technology, telecommunications, and consumer technology markets, with more than 1,100 analysts worldwide.