“We have witnessed a substantial rise of plastic waste and we are faced with an urgent question: how to manage plastic waste sensibly?” say the organisers of K 2019, the leading trade show for the plastics and rubber industry to be held in Düsseldorf, Germany in October. Exhibitors include major industry suppliers 3A Composites, Dow and DuPont. 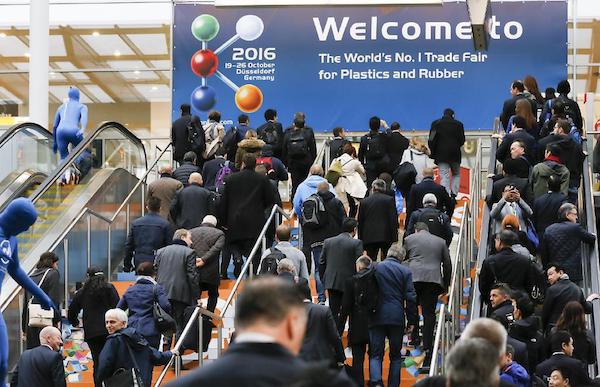 Plastic products have become an integral part of almost every area of life for good reason, the organisers said in a statement:

Despite its many advantages, this important raw material has come into disrepute for some time now – because of the plastic waste that pollutes entire regions and floats in huge carpets on the world’s oceans. But this problem can be solved. As the concept of “circular economy” plays a central role in this, it has become a hot topic at K 2019, the world´s flagship fair for plastics and rubber, which will be hosted from 16 to 23 October 2019 in Düsseldorf/Germany.

The idea at the root of the circular economy concept is quite simple: once used, valuable raw material can be processed at the end of its service life and be reused to create a new product – in an infinite loop. While some materials have limitations that do not allow this, a vast array of polymer materials are perfectly suitable for this approach. A circular economy dramatically reduces waste and also protects the resource of crude oil, because wherever new products are made from recycled plastic, there is no need to use raw, i.e. previously unused, materials.

About seventy years ago, plastics became a mass product. The University of California estimates that about 8.3 billion tons of plastics have been produced since then. Particularly in the wake of the strong population growth in many parts of the world, plastics production rates have shot up in recent times. The survey shows that the figures rose sharply: from 2 million tonnes of plastics produced in 1950 to 348 million tonnes in 2017. Accordingly, we have witnessed a substantial rise of plastic waste and we are faced with an urgent question: how to manage plastic waste sensibly? Two pressing problems are at the root of this complex challenge: littering and the unrestricted use of resources, which not only damages the environment but also slows economic growth.

Many countries have now realized that they need to change their approach if they want to harness the undeniable benefits of plastic products for years to come. In its plastics waste management strategy presented in 2018, the EU has shifted its focus to the recycling sector. In China’s current five-year plan, circular economy is postulated as a goal. Countries such as India and Indonesia have declared war on plastic waste pollution. There are also approaches to a cycle in Africa, for example in Nigeria.

Because criticism of plastics has also been growing among consumers in many places, a whole series of international brand manufacturers have already committed to the cause and adopted their own recycling strategies. Companies such as Coca-Cola, Ikea, Kraft Heinz or Adidas have promised to increase the proportion of recycled plastics in their products or their packaging in the future or – as in the case of Chinese Gree Electric Appliances, one of the largest manufacturers of electronic domestic appliances in China – have vowed to make their products completely recyclable.

Only pristine recycled material is suitable for the production of high-quality plastic parts. In practice, however, it is virtually impossible to predict the purity of secondary material generated from recycled plastics.

This is why Thorsten Kühmann, Managing Director of the Plastics and Rubber Machinery Association of the VDMA, proposes the introduction of standards for recycled materials.

“So far, no one who uses recycled materials knows what quality they will receive. This makes the processes less reliable, because production cannot be influenced as much as when standardized virgin material is used. Standardised recycled material would be much more acceptable.” In any case, the cleaner the plastic waste, the easier it can be re-processed into high-quality plastic pellets. Many experts therefore advocate separate collection systems to ensure that different plastics need no longer be separated by the recycling company, which in itself wastes a lot of water and energy.

Not all plastics can be recycled in an economically viable way, and not all used plastics find their way back into the cycle. But these materials can also be useful. Thermal recovery, i.e. incineration, of this group of plastics, for example, can save the fuel required by cement plants. In this application, plastic as a basic material is used at least a second time.

All experts agree on one thing: sustainable, global change and the successful and permanent implementation of a circular economy requires support and cooperation along the entire value chain, from the material manufacturer to the end consumer. Sustainable behaviour begins at home and at school.