Outdoor advertiser JCDecaux Australia says billboards in Sydney and Melbourne that celebrate ‘A New Era’ in Hong Kong are in accordance with “relevant policies” in relation to outdoor advertising. The ads have been slammed as “blatant lies” and communist propaganda by Hongkongers living in Australia. The Greens leader Adam Bandt has called for them to be taken down.

Hongkongers in Australia have complained to regulatory body Ad Standards about what they describe as “CCP propaganda.” 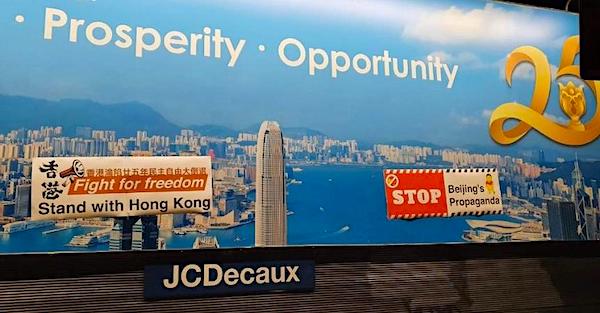 “Our organization believes the advertisement breaches section 2.1 of the AANA Code of Ethics (Code),” said a spokesperson for Australia-Hong Kong Link. “We have formally lodged a complaint to AdStandard regarding an advertisement of a billboard supposably funded by the Hong Kong Government owned by a French company.”

Adam Bandt, leader of The Greens party, said the ads should be removed.

“Disturbed to see a billboard in my electorate glorifying Hong Kong's supposed ‘new era’ after the brutal crackdown on democracy activists and civil society," Bandt said. "It is a cruel reminder of the rights and freedoms that Hong Kongers have lost in their home city and should be taken down.”

Activist Drew Pavlou called for a boycott of JCDecaux. “Shame on billboard company JCDecaux for taking dirty CCP money to put up propaganda glorifying police rule in Hong Kong. There should be no room for CCP propaganda on Australian streets, please boycott this company forever.”

A spokesperson for Ad Standards confirmed it had received complaints about the ads but told ABC News that political advertisements were outside its jurisdiction.

"Australia’s advertising self-regulation system is designed to regulate commercial marketing, and advertising of products and services," the spokesperson said.