“Following on the success of the record-breaking DigitalHeat FX DTF-24H2, which is a 24” DTF printing powerhouse with two print heads, ColDesi has released the Four head DigitalHeat FX DTF-24H4,” the Florida, US company said. “The new DTF printer from ColDesi prints at an astounding 145-155 linear ft. of full-colour film printing per hour, which equates to between 250 and 350 full shirt front transfers.”

Don Copeland, digital product manager for ColDesi, said: “Whether you’re running a one machine shop, adding transfer production to a high-volume business or replacing expensive direct to garment printers, power requirements are a big deal. “We’ve worked with our in-house R&D team (you might know them as BelQuette Technologies) to reduce the requirements for both the printer and the dryer to a single 30AMP, 220v circuit or run 2 systems off a single 50AMP, 220v circuit! Not only does this cut initial setup costs it can save literally hundreds, even thousands of dollars in power costs over the course of a year – especially for multi-printer shops.” 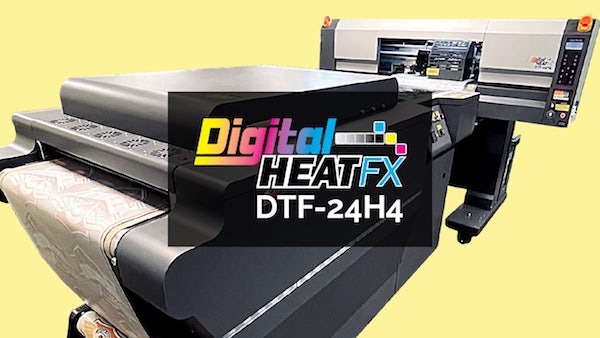 Mike Angel, head of ColDesi OnDemand software programs, added: “The DigitalHeat FX DTF-24H2 2 head machine is rated at between 45 and 55 linear feet per hour production, which is approximately 100 full front transfers per hour, which is more than enough volume for most shops.  But the new four head is more than three times as productive which meets virtually ANY demand.”

Every printer comes fully assembled, test printed, calibrated, and ready to print – already mounted on the stand, ColDesi said. “It is simply a matter of installing the print software, rolling the printer and shaker/dryer up to one another, powering up, and going through the simple out-of-box start-up instructions and you are printing transfers – typically within 2-3 hours.”