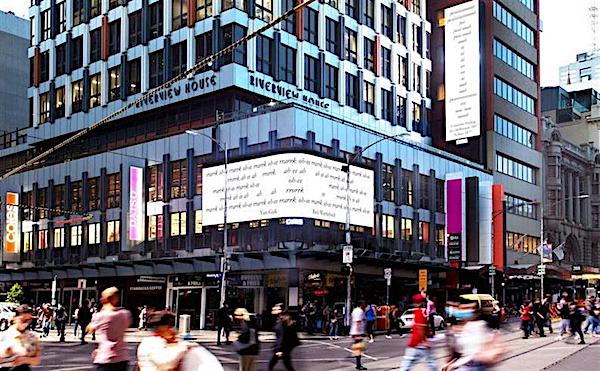 From a group of six shortlisted artists, the winners were announced by Melbourne’s Lord Mayor Sally Capp at an exhibition that displayed all of the finalists’ works on two prominent QMS billboards opposite the Flinders St Railway Station in Melbourne.

Catherine Clover’s (VIC) Song Cycle is centred on the phonetic words used by bird field guides to approximate the bird songs of the Indigenous Red Wattlebird and the introduced Common Starling, both local to Melbourne’s CBD. “These seemingly nonsense texts incorporate phonetic words used by naturalists to approximate a bird’s call or song,” Clover said. “The Red Wattlebird’s scratchy raucous song is rendered for the horizontal billboard using the rhythm and metre of an early morning exchange. The complex song of the Common Starling includes a long dropping melodic note, ideal for the vertical billboard. Hopefully, viewers will find it irresistible to sound out the calls as they pass by. Both birds are common to Melbourne. The Woiwurrung word Yan-Guk (Red Wattlebird) is a translation by Wurundjeri Elder Aunty Gail Smith."

Capp said: “The Fivex Art Prize: Billboard Art Reimagined is an innovative addition to our city’s rich creative heritage. Showcasing the best digital art from across the country on a prominent CBD billboard is another reason to come into the city to enjoy what’s on offer.”

The finalists’ works will be on view at intervals until the end of January, interspersed with commercial advertising content. The other finalists were awarded AU$1,000 each.