South Australia came out of its hard lockdown three days early on Saturday night after it was revealed that one of the positive cases at the centre of the Woodville Pizza Bar coronavirus hotspot had misled contact tracers. From midnight Saturday, businesses reopened with restrictions.

“Exercise outside of the home is now permitted & can be done with members of the same household,” announced Premier Steven Marshall on Friday. “All other restrictions under the Stay at Home Direction will remain until midnight Saturday.

“Today’s revelations about an infected individual lying to authorities and deliberately misleading our contact tracing team are deplorable and utterly unacceptable,” the Premier said. “To say that I am fuming about the actions of this individual is an understatement. South Australian jobs, businesses, and lives have been put on hold, because of this disgraceful behaviour." 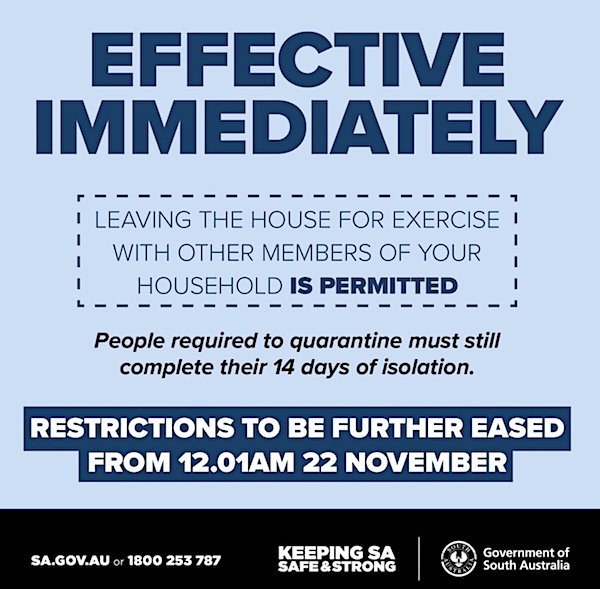 Investigations revealed that one of the close contacts linked to the Woodville Pizza Bar cluster had deliberately misled the contact tracing team. It's alleged the man, now facing possible charges, said he was a customer at the Pizza bar but in fact was an employee.

“Their story didn’t add up,” Marshall said. “We pursued them. We now know that individual lied. I stress this point – this is still a dangerous cluster and our health experts remain concerned. We are still trying to locate thousands of people who may have had dangerous contact at the Woodville Pizza bar. Even more, now that we know that the person lied we need to find and isolate a whole new group of his associates. We are still urging South Australians to get tested.

"But just as we have acted immediately to put restrictions in place to keep South Australia safe, we are going to act to lift them much sooner than previously advised. I will not allow the disgraceful conduct of one individual to keep South Australia in these circuit breaker conditions one day longer than is necessary. People can now leave their homes to exercise - and can do so with other members of their household.

“There will be further lifting of restrictions from midnight on Saturday night, which we will keep you informed on. I couldn’t be prouder of the way South Australians have worked together this week, and throughout the entire year. Let’s not allow this one individual to taint our collective achievements. Let’s remain united in keeping SA safe and strong.”

Stephen Myatt, SA head of national employer association Ai Group, said: "The end of the South Australian lockdown brings to a conclusion an enormous amount of dislocation, disruption and cost to industry in South Australia. The relief comes from businesses being allowed to rebuild depleted supply chains and honour contractual obligations caused by the very short notice given to close-down.

"South Australia should be pursuing a strategy that includes a 'living with COVID-19' approach. Unless we pursue such a strategy it could give rise to over-reach and we want to avoid at all costs a revolving door close-down / open-up scenario triggered by just a handful of cases. SA should have faith in its testing and tracing systems and deal with cases locally in a measured way.”