Business confidence up on revenue jump in November

Almost a quarter (24 per cent) of Australian businesses reported an increase in their monthly revenue in November compared to 16 per cent in October, according to data released by the Australian Bureau of Statistics (ABS). 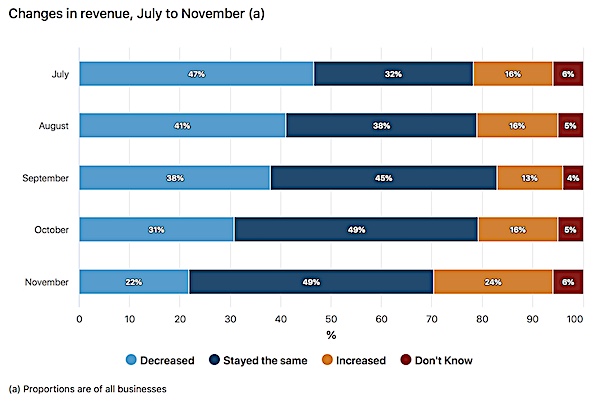 “As well as a greater proportion of businesses experiencing an increase in their revenue in November, one quarter (25 per cent) expect revenue to increase for December. Some businesses commented that seasonal factors had influenced these expectations.”

The survey included questions about capital expenditure plans for the next three months.

“One in five (22 per cent) businesses indicated they have capital expenditure plans over the next three months, with about three quarters (73 per cent) of these businesses expecting to spend the same or more than what is usual for this time of year,” Shepherd said.

“We asked businesses what had influenced their capital expenditure plans. The most common factor reported by businesses was future economic uncertainty (29 per cent), however the proportion reporting this as a factor has halved since August (59 per cent).”

The survey is part of a series of additional data the ABS is releasing to measure the economic impact of COVID-19. Data was collected between 4 November and 11 November.

More information is available on the ABS website at Business Indicators, Business Impacts of COVID-19.