Outdoor advertiser oOh!media and ad agency FCB NZ are helping New Zealand voters exercise their democratic rights in this Saturday’s (Oct 17) general election, via a localised Out of Home campaign for the New Zealand Electoral Commission. 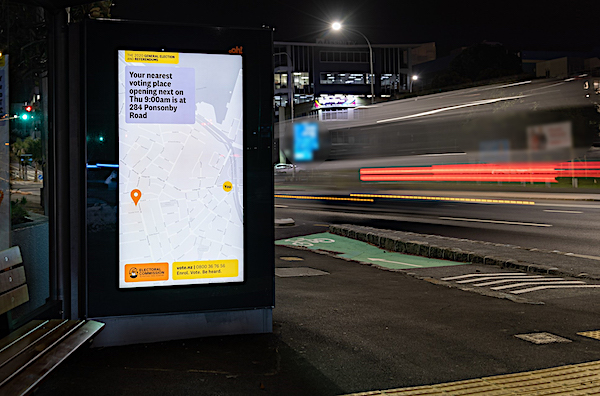 The campaign is designed to let voters know of an increased number of voting locations available this election and uses dynamic information to guide voters to their nearest polling place.

“With advance voting growing in popularity, we needed a campaign that helped New Zealanders find out where they could vote, and that was localised to their unique area,” says Suzanne Knight, manager communications and education at the Electoral Commission. “We’re really pleased at the reach and personalisation this campaign has delivered, especially as we have voting places in a very wide range of different locations.”

“The contextual approach of the messaging includes a street address, voting place opening times and the distance in metres to the nearest voting place, which are layered on top of a map that visualises pins of the voting locations, updated dynamically via an API,” says oOh!media. “To make the campaign as effective as possible for early voting and for election day itself, many sites have multiple creatives scheduled to them, to play at different times throughout the day reflective of when and where each voting place will be open."

Over the space of two weeks, as every booth opens and closes, the dynamic changes will result in a possible 4,231 different creative states and 16,048 changes served across 290 screens nationally.

“This campaign is all about grabbing voters’ attention across the country and is a great example of an integrated agency firing on all cylinders,” according to James McMullan, head of digital projects at FCB NZ. “Smart media thinking, creative with purpose, using FCB’s mass personalisation tool, BOB, together with oOh!’s assets, means over 16,000 messages will constantly update Kiwis on where they can vote in real time, wherever they are.

“We have worked closely with oOh!media to plan this campaign in great detail, and using the personalisation platform for the dynamic digital creative adds an extra layer of audience relevance and engagement.”

“Our assets reach large numbers of people, and this creative was specifically designed for the Out of Home format – making it highly effective at providing valuable information to the public. Getting the right messages playing at the right time to the right audiences was the kind of logistical challenge we love to take on, and it’s been great to see this come to life.”

FCB’s worldwide network spans 150 offices in 90 countries, with over 8,000 people. It is part of the Interpublic Group of Companies (NYSE:IPG). For more information, visit www.fcb.com

The Electoral Commission, responsible for running New Zealand’s parliamentary elections, is a Crown Entity which means it works independently from government.