US-based Xerox will sell its 25% stake in Fuji Xerox - its joint venture with Japan’s Fujifilm Holdings - for $2.3 billion, after billionaire Xerox investors Carl Icahn and Darwin Deason last year blocked a proposed $6 billion merger deal between the two companies. As part of the new agreement, Fujifilm has agreed to drop its $1 billion lawsuit against Xerox over the failed merger. 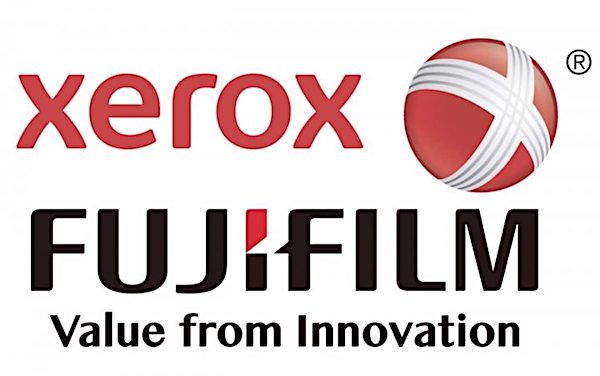 “As part of the new deal, Xerox will continue procuring copiers from Fuji Xerox, which will operate as a wholly owned subsidiary of Fujifilm,” said Reuters. “Xerox will also sell its stake in another smaller JV with Fuji Xerox to Fujifilm, which will withdraw its lawsuit, the companies said in statements. Xerox said it plans to use the proceeds to pursue acquisitions, adding that it also plans to return money to shareholders and pay down $550 million debt due in December.”

Xerox announced the surprise move in a statement to the US Securities and Exchange Commission:

“As further described below, the Company entered into definitive agreements relating, among other things, to: sales to indirect subsidiaries of FH of the Company’s indirect 25% equity interest in Fuji Xerox Co., Ltd., a Japanese company, and of the Company’s indirect 51% partnership interest in Xerox International Partners; modified sourcing terms for future product programs; the grant of a trademark license to enable FX to transition to a new brand while compensating the Company for continued use of its name; the grant of an IP license to allow FX to provide certain OEM products to certain named parties on a worldwide basis in exchange for a fixed royalty; and dismissal of a pending lawsuit FH filed against Xerox Corporation.”

Fujifilm confirmed the deal in a statement issued in Tokyo:

FUJIFILM Holdings Corporation announced today that it has entered into a definitive agreement with Xerox Corporation under which Fujifilm will acquire the 25% stake in Fuji Xerox Co., Ltd. owned by Xerox. This transaction will bring Fujifilm’s ownership of Fuji Xerox to 100%. The transaction was unanimously approved by the Boards of Directors of Fujifilm and Xerox.

Fuji Xerox will operate as a wholly owned subsidiary of Fujifilm and will continue to supply to Xerox after completion of the transaction.

“This transaction is an ideal next step for Fuji Xerox and Fujifilm that we believe serves our stakeholders well and reflects our commitment to create innovative products that contribute to society,” said Shigetaka Komori, chairman and CEO of Fujifilm.

“Fuji Xerox has now become a lean and strong company after a series of reforms we started in 2018, and I am confident that with this initiative it will be even stronger.”

“Full ownership of Fuji Xerox will facilitate faster decision making in a rapidly changing business environment. At the same time, Fuji Xerox will be able to further strengthen its business by capturing new OEM opportunities in the global market, leveraging our world-leading product development and manufacturing capabilities. We are excited to start a new chapter for Fujifilm and Fuji Xerox.”

As part of the transaction, Fujifilm has agreed to withdraw litigation it filed against Xerox on June 18th, 2018 claiming damages caused by the unilateral cancellation of the definitive agreement between the two companies.

Background to the transaction

Founded in 1962, Fuji Xerox Co., Ltd. is a leading document solutions company and most recently has been a 75%-25% joint venture between Fujifilm and Xerox. Throughout its 57-year history, it has provided office related products and solutions to increase productivity and has grown into a company with revenues exceeding 1 trillion yen. It is also known as one of the most successful cross-border joint ventures between Japanese and non-Japanese companies.

Fuji Xerox operates in the Asia-Pacific market and has a strong customer base for large corporations and government offices. In addition, it has achieved a unique position in the document industry by leveraging excellent product development capabilities and manufacturing technology.

In light of the fact that uncertainty about the future of the global economy is increasing and competition in the market is intensifying, Fujifilm has decided it is best to have Fuji Xerox as a wholly owned subsidiary to flexibly implement necessary measures in a timely manner in order to achieve further growth.

Fujifilm to acquire Xerox’s 25% ownership stake in Fuji Xerox and its 51% ownership in Xerox International Partners, a 51%-49% Joint Venture between Xerox and Fuji Xerox that operates OEM business in the U.S. and Europe

Strengthen Document Solutions business — While it will continue to supply its products to Xerox under an existing agreement, Fuji Xerox will also strengthen its Document Solutions business in several ways. Most important, Fuji Xerox will have expanded OEM opportunities and supply products such as printer engines to customers worldwide, including the U.S. and Europe, leveraging its world-leading product development and manufacturing capabilities. Fuji Xerox will be ideally positioned to build on its increasingly sophisticated technology including expertise relating to cloud, artificial intelligence, and the Internet of Things, accelerating further expansion into adjacent areas.

Capitalize on new product opportunities — Enhanced synergies will bring new opportunities in growth industries. Fuji Xerox’s language processing technology together with Fujifilm’s image processing technology can be utilized to develop automatically generated diagnostic reports in the medical segment. In the printing industry, Fujifilm and Fuji Xerox will be better positioned to facilitate digitalization, offering one-stop solutions from analogue to digital. Value creation and synergy opportunities will be enhanced by combining Fujifilm's graphic systems business which possesses extensive client base in commercial and package printing, with Fuji Xerox’s sales, technological, and product creation capabilities.

The transaction is expected to be completed within November 2019.