The power of the collective

Alison Stieven-Taylor
“Never doubt that a small group of thoughtful, committed citizens can change the world; indeed, it's the only thing that ever has.” Margaret Mead

The unprecedented outpouring of support for the victims of the Black Saturday bushfires in Victoria in February not only reflected a nation’s grief, but also the power of the collective where individuals put aside personal agendas and pull together for a common purpose.

The communities who are rebuilding their townships after the bushfires may be erecting one house at a time, but they all know at the end of the rebuild everyone will have a roof over their head.  And perhaps even more important than the physical shelter will be the over-riding sense of pride in what we can achieve when we work together.

A similar approach in business, where individual gain is channeled into a collective focus, can deliver positive results that are not just goal driven, but also lead to the development of a culture of ownership and accountability.  And an environment where people are happy to come to work!

Can ‘teamwork’ be more than corporate hyperbole?

Despite its reputation for being a warm and fuzzy management term ‘teamwork’ can actually be very productive if applied in the right situations and managed intelligently.

Teamwork - where the collective is working towards a single vision, shares the same values and goals and is empowered to make decisions – is a truly valuable business asset.

But for teamwork to succeed individuals need to reject the ‘what’s in it for me’ attitude that has pervaded the workplace in recent years and adopt a ‘what’s in it for us’ approach.  A team working at its optimum will deliver tangible and measurable results.  And it will be more productive than individuals pursing the same activities.

The team behind Oprah Winfrey
One of the most successful people in the entertainment business is Oprah Winfrey, but she wouldn’t be the success she is without a committed team behind her.  And I don’t mean a group of flunkies who are ready to do her bidding.  I mean a sound team of professionals who are working together to achieve a common goal.

So impressive is the teamwork behind Winfrey’s company Harpo Productions that it has become an MBA class case study at Harvard Business School (HBS).

Nancy F Koehn is the James E Robison Professor of Business Administration at HBS.  In an HBS article on the development of the Harpo Productions case study Koehn said she and her team chose Oprah’s company because they were keen to explore what business leaders could learn from the talk-show Queen.

Koehn and her associates worked for three years to prepare their detailed case study which looked at all aspects of Oprah’s business – her phenomenally successful daytime TV show, the O magazine, the book club – to “understand her company's revenues, costs, and competitive advantage in (this) crowded, rivalrous market.”  What they learned was that behind this extremely successful media icon is a culture of highly developed teamwork.

“Oprah has an incredibly committed team. There is very, very little turnover. Her people love their work…you can feel the passion. And you hear (the Executives’) knowledge and intelligence about the business they run,” reported Koehn. 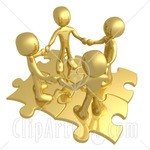 "You can see how the left side and the right side of an organisation come together to produce something that matters, and that is also…very successful financially."

Koehn said the overriding message was collective commitment and a desire to contribute.  “It was clear that Winfrey's staff think, to a one, that they have a very important mission that they are fulfilling as an organisation; and that they have very important precepts for how they execute and engage with that mission and execute it day to day.”

"For example, no one starts a meeting at Harpo without stating, 'Here is my intention.' It operates this way at high levels in the company as well as on day-to-day tactical levels."

The key to successful teams
You can’t throw a group of people together, call them a team and then expect them to go off and solve the problems of your business.  The Harpo Production team is a reflection of the company’s philosophy, the framework for which is the expectation that everyone will contribute to the health and wealth of the company and not just do a job.

When the word collaborative is used in a team sense it doesn’t negate the requirement for accountability.

For a team to be effective it must have decision making powers in order to move forward on the project or task it is has been assigned. 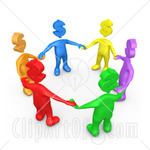 Teams need direction, and within teams roles need to be determined, so that each team member has a sense of responsibility and is able to contribute to the overall objective of the team.   And teams must have the support of management, from the very top of the corporate ladder.

How to form an effective team
When you are putting together a project or department team, consider the following criteria –