How did a Rock & Roll ‘Hall of Fame’ Inductee (twice over – no less) and the recipient of an OBE, Impact Wide Format Printing Forever.

It was one of those watershed moments for wide format printing back in 1990, Graham Nash the legendary singer-songwriter a two-time Rock and Roll Hall of Fame inductee-with Crosby, Stills, and Nash and with the Hollies, wearing his hat as an avid and well-respected photographer was viewing the operation of an Iris Graphics 3047 wide format printer. Graham, along with his manager Mac Holbert, saw the potential for more uses with the printer. 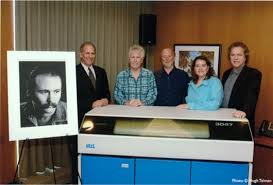 In fact, so impressed were the pair that they purchased an Iris Graphics 3047 printer. They opened Nash Editions and began producing Graham’s work.  Initially this was just about reproducing and selling Nash’s work, however as the printer came with a substantial price tag for the time (US$126,000) they also looked at its wider implications and found that there was in fact a huge market for the type of prints they were looking to produce.

The Iris 3047 however did come with some flaws. Whilst the output that it produced was excellent, it was expensive and costly to maintain with high wastage and the prints were not long lasting.

Nash Editions spent much time and money refining the production processes, as the Iris inkjet printer was the only available machine for this type of work at the time. Nash and Holbert worked closely with Disney colourist David Coons, as well as photographers and artists of the time as they followed the quest to solve the problem of lack of permanence in the prints. Using software and a high-resolution scanner Coons had developed, the outputs & Roll not only improved but they achieved the permanency so critical to the success of their business ventures.

Such has been the impact of Nash that his work has been (and continues to be) shown in galleries and museums worldwide. His company Nash Editions’ original IRIS 3047 digital printer and one of its first published works—Nash’s 1969 portrait of David Crosby— is now housed in the National Museum of American History at the Smithsonian Institution in recognition of his revolutionary accomplishments in the fine arts and digital printing world.

It is considered by some that this period and the involvement of Graham Nash and friends was the real birth of Wide Format Printing.

Nash’s involvement continued into 1999 when Nash Editions, working with Epson, became a beta testing site for the Epson Stylus Pro 9500, a ground-breaking large format printerrock & Roll . The shift then to pigmented inks was the final step in the history of today’s wide format printers. By 2002, the quality and appearance issues associated with printers and inks began to be resolved by industry leaders, beginning with Epson and eventually including Hewlett-Packard and others. Leading to the Wide Format Printing industry as it is today with, new technology making wide format printers both affordable and user-friendly.

Customers and users of wide format printing, whether photographers, artists or everyday businesses expect their work to endure without fading, and Nash and his friends were critical at the time for recognising this need and responding, starting the ongoing technological revelation that now delivers both stability and permanence in absolutely stunning living color as a matter of course.